*Every so often Jerry will regale us with tales of living in Munich in (mostly) his own words. Enjoy!*

As Steph mentioned in the last post, I started my job a few weeks ago and so far, I love it. It’s such a great company and I really enjoy working with my team. One of the perks of working here is that every now again, my team will organize various bonding excursions outside the office. For example, they have gone hiking, biking, rafting, zip-lining/ropes course, go-carting and even Segway-ing (if that is even a term.)

This past year, they even took yodeling lessons because some team members complained the other events were too active. They basically sat around a table with the instructor walking around the room and making everyone yodel with her as she played the accordion. Amazing.

We arrived at the Löwenbräukeller Biergarten (which, surprisingly doesn’t serve Löwenbräu beer…) right around 6 PM and had the rules explained to us (in German, natürlich). Luckily, I had been reading up on the game online (they don’t call me Jerrypedia for nothing) so I knew the basics. I thought we would be playing on ice, because it is a winter sport and the German word for “ice” is literally in title, but the boards were setup on plastic and soap water was used to lubricate the surface . Essentially it was a mix of shuffleboard, bowling, and a bubble bath.

Unfortunately, this soapy concoction made the game extremely difficult as you couldn’t judge your speed consistently. The lane’s surface would start fast, then slow down, then speed up again. So no matter how much I altered my throw, I ended up fouling out by hitting the Taube (wooded cube) against the rail more often than not. Even though my teammates don’t suck nearly as much I do in the art of shufflebowlbathing, we still lost. 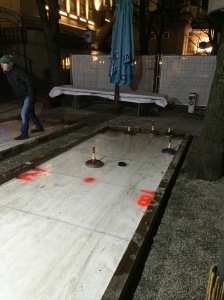 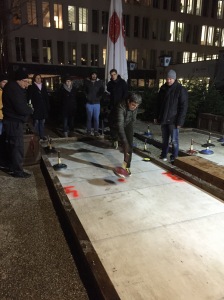 We started a second game, but our time allotment ran out so we headed inside the Löwenbräukeller to enjoy food and drinks. In spite of our epic loss, I’m so glad I came out. It was nice to get to know everyone better and to enjoy a few beers and laughs. I’m secretly hoping we can get those yodeling classes back on the schedule some time soon.